The midday sun beats down relentlessly as the wind whips up dust in Zagagadan village, in Niger’s Balleyara district. In a compound surrounded by a mud wall, a group of women sit in the shade of a neem tree. Most wear blue hijabs with an Islamic Relief logo on the front and back.

These women are members of the Soudji Ma Zoumboua Zagagadan women’s group. Among them is Rabi Abdou, 45. Rabi is mother to nine girls and one boy.

According to Rabi, problems are what brought the women together to form the group. “Each one of us had a problem and we decided to come together to see how we can solve our problems,” she explains.

The mother-of-ten says some of the women were sick and did not have money to go to hospital. “Each member was to give some money to one of us so that they could go to hospital,” Rabi says.

Formed in 2013, the group currently has 25 members. Each member is engaged in small businesses such as fattening animals, knitting, making bed sheets and selling cereals. Such enterprises are their main source of income. 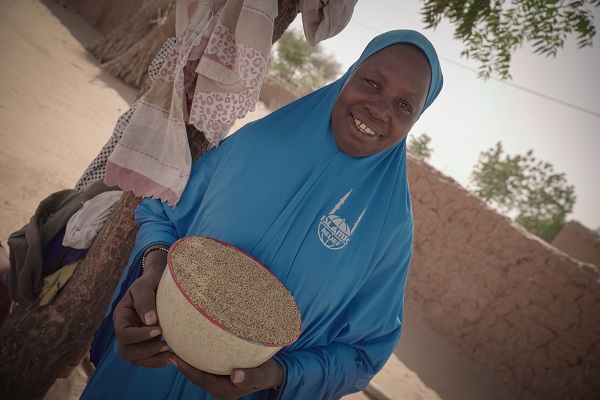 Rabi Abdou shows off some of the produce stored at the group’s cereal bank.

In the compound where the women meet, they have leased a room that acts as their cereal bank.

“The major problem faced by women is lack of resources,” adds Rabi, describing the problems women face in her community. In Niger, cultural factors mean women have less access to, and control of, resources than men do.

Some women in the community are widows without any source of income and are left to struggle to feed their families.

Soudji Ma Zoumboua Zagagadan started working with Islamic Relief in 2019. After helping the group to create a business plan to maximise profitability, we gave the collective XOF 1,700,000 (around £2,340) and helped them decide how best to invest the money. The group used XOF 1,200,000 (around £1,653) to set up the cereal bank and divided the remaining money between its members, enabling each woman to set up their own enterprise.

The cereal bank means they can all store their grains in the same place. Now they have a place to come together, they are meeting every week.

“When Islamic Relief came in, we got training on how to manage our businesses,” says Rabi. “I now know if I have made a profit or loss. I know how to save some money in case of sickness.”

Islamic Relief follows the investments they make, helping the women to boost their profit.

The cereal bank has also helped the women group to better store their produce, greatly reducing the losses they incurred before – boosting food security. 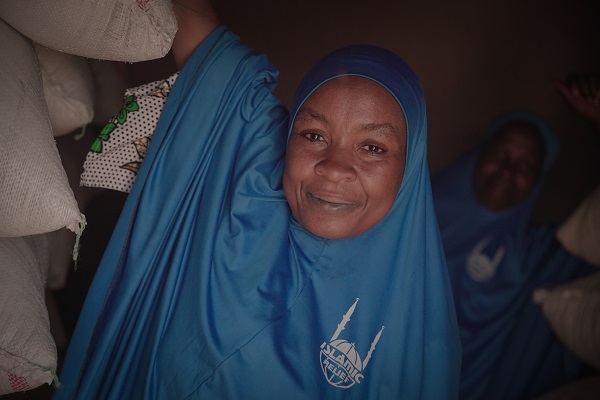 Rabi Adamou is raising her children alone and is now an activist working to end gender-based violence in her community.

Another member of the group is mother-of-13 Rabi Adamou. Four of her children are married, and her youngest are seven-year-old twins.

Since her husband lost his job and went to Ghana to look for work, she has had to raise her children alone. “For three years now, there has been no contact with my husband,” she explains.

Rabi works as a community volunteer with Islamic Relief in the area, where we’ve been raising awareness about gender-based violence and early forced marriage.

According to the World Bank, the country has the highest rate of child marriage in the world: three in four girls are married before their 18th birthday.

Rabi Adamou recalls recently, using the awareness and training received from Islamic Relief, intervening when a girl was about to be married. “Another woman and I approached the family and stopped the wedding,” she says, describing how they persuaded the family to reject the harmful practice and allow their daughter to continue her education, “The girl is still in school.”

Incidents of early marriages are slowly decreasing, she tells us, thanks to the awareness raised through Islamic Relief. 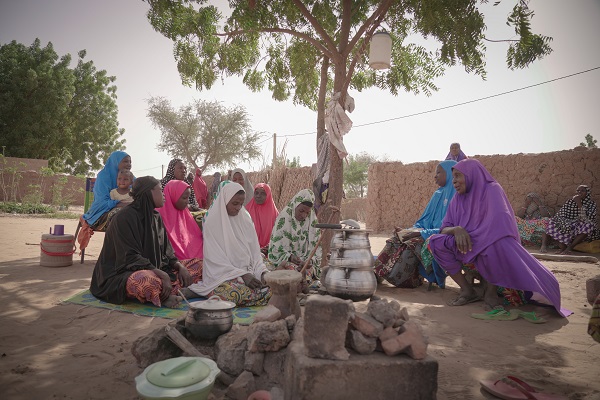 The community is also benefiting from a better understanding of domestic violence.

“Before Islamic Relief came in, many people did not know about the protection and inclusion services offered at the mayor’s office,” says Rabi Adamou. “If a man continues beating his wife, we urge women to seek protection and report the case to police.

One of the biggest impacts of the programme has been in empowering women with newfound self-reliance.

Their group has inspired many other women in the community.

“So many women are coming to ask us how to form their own groups,” she explains.