The visit is part of her trip to countries affected by Cyclone Idai. In March, the powerful storm struck parts of Mozambique, Malawi and Zimbabwe.

It killed hundreds of people, and destroyed many homes. Among the affected were communities already reeling from disasters such as flooding.

When Idai struck, Islamic Relief was able to respond swiftly on the ground in places like Chikwawa, in Malawi, where we were helping local families affected by flooding.

The UN delegation visited one of our projects in Chikwawa, through which we are building 50 homes to replace those lost to floodwaters. 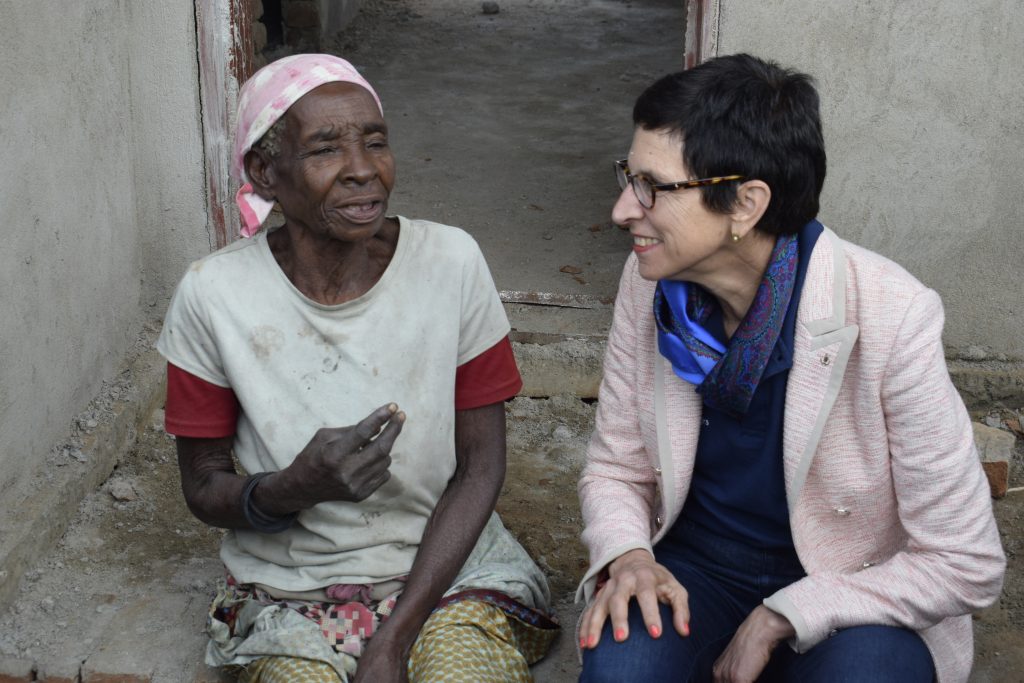 Tereza Wadi, who lived in a tent after floods destroyed her home, speaks to Assistant Secretary General Ursula Mueller.

Helping families that lost their homes to disasters

The Assistant Secretary General is in Malawi with Omar Rabi, diplomat and political coordinator for Morocco. UN Resident Coordinator Maria Jose Torres, Consul General of the Republic of Malawi Wilson Moleni, and other UN officials also took part in the visit to Islamic Relief in Chikwawa.

The scheme is part of a broader programme to build 250 homes in Blantyre and Chikwawa districts.

It is life-changing for families in a country in which few can afford to build sturdy houses or rebuild homes destroyed by disasters.

Our project coordinator, Patrick Moyo, showed the officials around one of the new disaster-resilient homes. They also met people who are benefiting from the Islamic Relief project, who spoke candidly about the challenges they face.

Memory Kangulu, a single mother, explained that flooding destroyed her home in 2015. The community built her a new house, but Cyclone Idai damaged it.

Now living in a tent that she received through Islamic Relief’s emergency response to the cyclone, Memory is looking forward to moving into the new home that we are constructing.

Ursula Mueller commended Islamic Relief for the standard of housing, and for involving local communities at each stage.

Wilson Moleni also recognised the quality of the project and called for other NGOs to undertake similar schemes in flood-prone areas. He in addition thanked the Traditional Authority Mulilima for providing the land upon which we are building the houses.

Islamic Relief has been working in Malawi since 2006. Our work includes increasing resilience to natural disasters, tackling food insecurity, and building secure livelihoods.