HomeWhere We WorkJordanHearing aids give hope to Syrian refugee children

Children are often among those most affected in crises. In Syria in particular, over ten years of crisis has led to an entire generation of children growing up having never known peace. Thousands of children have been orphaned, and many have been left with serious injuries and psychological issues. Islamic Relief is working with Syrian refugees in Jordan to help them overcome the wounds of trauma.

Thousands of families are struggling to survive, often lacking access to food, water, healthcare and even shelter. According to a report by UNICEF, 85% of all Syrian refugee children in Jordan are living below the poverty line.

12-year-old Mariam* and her family fled Syria in 2013, when the situation worsened in their home town of Deraa. The family felt they had no choice but to escape, for the safety of their children.

“Back in Syria, our financial situation was very good. My husband used to work in construction. Our house was nice. Everything was nice there, but now all these things are gone”, says Mariam’s mother.

Once they arrived in Jordan, the family went directly to Al Zata’ari camp, where they lived in very poor conditions for 2 months.

“We left the camp after one of my children was diagnosed with hepatitis. We didn’t have work so we couldn’t afford to cover the cost of his treatment. Months later, he died.

“I also noticed that something was wrong with Mariam. She couldn’t hear me unless I raised my voice to get her attention, and she struggled to speak. I was supposed to take her to the doctor, but then her father was injured and we had no money left after that to pay for her treatment either”, says Mariam’s mother.

Amer is also a Syrian refugee child living in Jordan. He has had a hearing impairment for several years, but his family could not afford the intervention he needed.

“Hearing loss was affecting Amer’s life, as it’s had an impact on his speech and language development. I took him to the doctor and he told us that Amer needs either surgery or a hearing aid. However, we couldn’t afford either of these options. I am an old man – my eldest son is the sole breadwinner in our family and his wage only covers our rent”, says his father, Qasim.

Islamic Relief work with Syrian refugees in northern Jordan to provide children with vital healthcare. We have also delivered life-saving surgeries, medical equipment and a series of health awareness sessions, helping to transform the lives of the children and their families.

Mariam and Amer were among 54 children to receive hearing aids as part of this project, which has greatly improved their condition and quality of life. 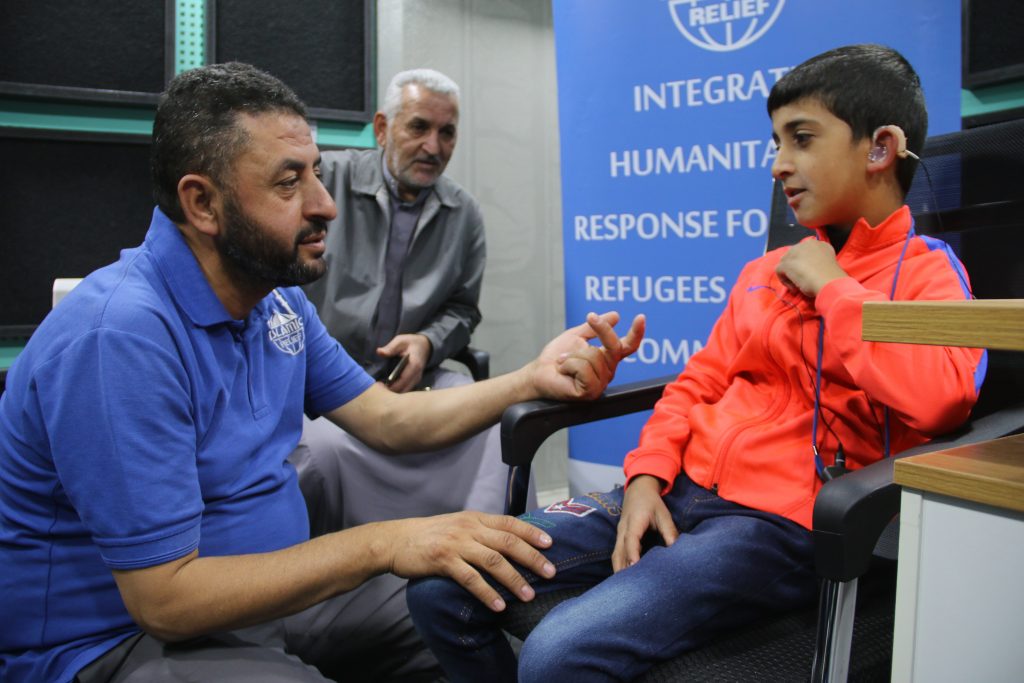 “As a mother, nothing hurts more than seeing your child struggling. I was worried about Mariam and what her future would hold. What would happen if she lost her hearing completely? At the same time, we were helpless. Her father is paralysed and is unable to work. I depend on food vouchers to feed my family.

“Your support came at the right time. It gave Mariam hope to be able to hear fully again. She began to interact more with us”, says Mariam’s mother.

Amer’s hearing aid is also having a very positive impact on his development.

“Amer was unable to hear what was taught during school classes. He also couldn’t speak like other children his age. His teacher told us to fix the problem before he loses his chance of an education altogether.

“But Alhamdulillah, after his hearing aid was installed, the worst scenario didn’t happen. Jazakallah khair. May Allah reward you. Amer now talks to us and is able to respond quickly.  He is doing very well at school and that’s great”, says Qasim.

Islamic Relief has been providing life-saving aid to Syrians since the start of the crisis in 2011. Donate now to support Islamic Relief’s life-changing work around the world.