A Syrian refugee can teach us about hope and endurance

Writing for Euro News, Islamic Relief’s Kate Wiggans reflects on what she learned from an inspiring Syrian refugee in Iraq.

I’ve been working in the aid sector for more than ten years and recently, I must admit, I have been feeling jaded by a string of seemingly endless problems; from never-ending wars to climate change related disasters and the inevitable waves of displacement that follow.

It’s in this mixed mood that I returned to Iraq this week, half dreading it, half excited to come back to a place I have always loved but had not seen in more than a decade.

Islamic Relief supports refugees and people forced from their homes

My organisation, Islamic Relief, runs programmes here with refugees and the internally displaced including supporting survivors of gender-based and sexual violence.

Important work to be sure, but I wasn’t sure if I’d be able to cope with sadness and trauma on top of how rubbish things already felt in what I know is my protected bubble.

Then I met Shaza. A 30-year-old from Homs whose determination to work for a better future for everyone, despite all that she’s been through, put me to shame and busted the stereotype of a hopeless and desperate refugee wide open. 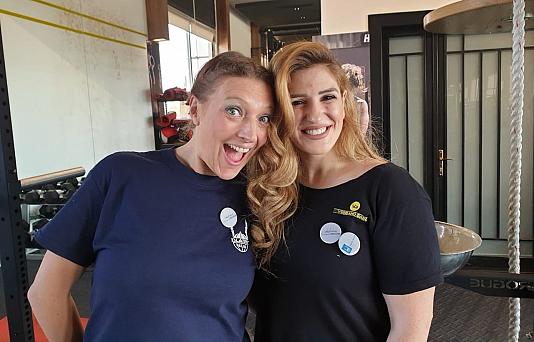 Shaza graduated from university as a dental technician in 2010, one year before the crisis in Syria broke out. Her future and prospects were quickly destroyed as the violence escalated.

Depressed, trapped and scared half to death, she decided she couldn’t just sit there. She wanted to find strength and focus, keep moving.

So, risking bullets and bombs, she walked to a nearby gym and found it locked. Instead of turning back, she called the owner who rushed to bring her the key and get her inside to safety. From that day on, it became her sanctuary.

Shaza is now a fitness instructor in her new adopted home of Erbil, Iraq – the only place she found that would take her in after finally fleeing Syria in 2017.

I met Shaza at a Career Centre for young people run by Islamic Relief where she gets training in leadership, advocacy and other life skills – including how to listen to and communicate, how to form goals based on her circumstances, and crucially, how to demand her rights.

She then volunteers to visit refugee camps to pass on these skills to fellow Syrians.

It is not an easy task. Shaza oozes positivity, ability, ambition and independence, but it is impossible to escape the scars that the crisis in Syria has caused.

Her husband, a doctor from her hometown of Homs, works in New York. They got married in Lebanon in October 2013 and spent 10 days together as husband and wife. He left the region, she went back to Homs. Since then, she’s only seen him four times.

Despite legal help, she says her efforts to get a visa to the US have all failed or dragged on indefinitely. Now that she is three months pregnant, her time is running out.

Apart from her friends at the gym and the centre, she is alone in Iraq. However, even at her most vulnerable, it is not her own plight that brings her close to tears.

As her voice shook, she told me: “It breaks my heart that I got the chance to survive and work and reach my dreams while others don’t. I can’t do speeches about positivity all the time because I live another life, but I do my best to motivate them, and maybe most of them will survive and can understand to keep chasing their goals. But that’s hard. I know things are outside of their control.”

In Erbil, and across Iraq’s Kurdistan region, Syrian refugees are freely allowed to work: a rare right not granted to most of the other 25 million refugees registered by the UN worldwide.

Of the more than 83,000 Syrians living in Erbil city itself, 60% live outside the city’s four camps and in host communities alongside Kurdish Iraqis as well as other internally displaced people (IDPs) from other parts of Iraq.

Still, employment opportunities are scarce and strongly favour those with skills and connections.

Determined to help others

For Shaza, and others I met this week at the training centre (including the Iraqi IDPs and local Erbil youths), helping others has become a much-needed release and despite their own struggles, every one of them is determined to do whatever they could to help others.

Shaza described it as her “addIraqiction” and says what keeps her going is a “dream to join all the people around the world who are suffering from violence, all the women who lost their children or their husbands, who lost everything and maybe make a new world without poverty, without pollution, without war and without borders.”

Today, as we mark World Refugee Day, I hope other stories like Shaza’s are shared. Hers shows how powerful survival can make you, and how people who have suffered can use their significant strength to flourish with pride and vigour – if only they allowed the freedom to do so.

Kate Wiggans is Islamic Relief Worldwide’s UN Representative in Geneva who is currently on assignment in Iraq. Her primary focus is refugees and refugee rights.

This piece was first published on Euro News on 20 June 2019. The main photo in this article was captured in 2017 and depicts people living in a camp for those forced from their homes in Mosul, Iraq.