A year after disaster struck Sulawesi, its people are still rebuilding their lives

HomeWhere We WorkIndonesiaA year after disaster struck Sulawesi, its people are still rebuilding their lives

Azna, 68, was busy in her kitchen the evening the ground began to shake. Looking out of the window, she saw trees come crashing down, while the floor cracked beneath her feet.

“The floor of our house broke, and water came out from underneath, flooding the living room,” says the mother-of-three, remembering her last moments at home in Lolu village, Sigi.

She and her husband live in Central Sulawesi, Indonesia, which became a disaster zone when a series of powerful earthquakes struck on 28 September 2018.

One of the quakes, a 7.5 magnitude tremor, triggered a tsunami. Huge waves struck Palu city and other settlements, sweeping away homes and buildings. And soil liquefaction – a rare event in which the ground flows like liquid – submerged many buildings in mudflows. 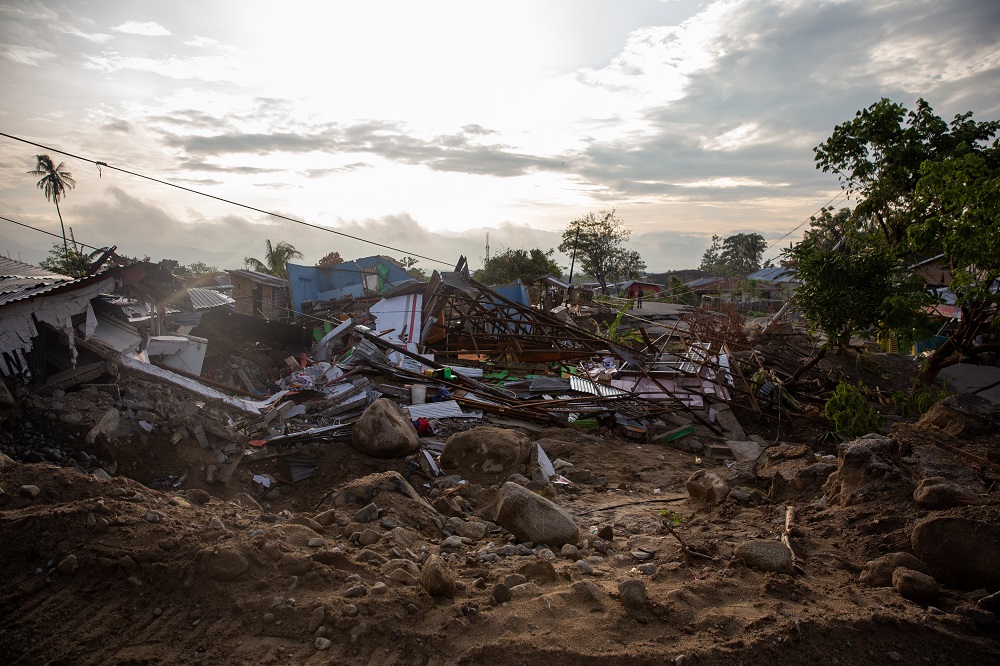 The aftermath of the September 2018 disaster in Palu, Sulawesi, Indonesia.

“Many of our neighbours’ houses collapsed. We followed other people to higher ground about eight kilometres away.”

That night, Azna and her husband slept in an open field.

“We were just underneath the sky and stars. We were very frightened.”

The next day, their neighbours gave the couple a tent to protect them from the rain. On the third day Azna and her husband tried to return to their village, but strong aftershocks made them turn back.

A week after the disaster, they made it home to assess the damage. Their house had fallen down in places, making it uninhabitable. It was devastating news.

“My husband’s occupation is farming, and with an uncertain income we were far from hope that we would be able to repair the house.”

Their home was one of tens of thousands destroyed by the disaster, which claimed over 2,000 lives.

A key lifeline for many survivors was Islamic Relief, who just the month before had launched an emergency response when quakes struck the Indonesian island of Lombok. 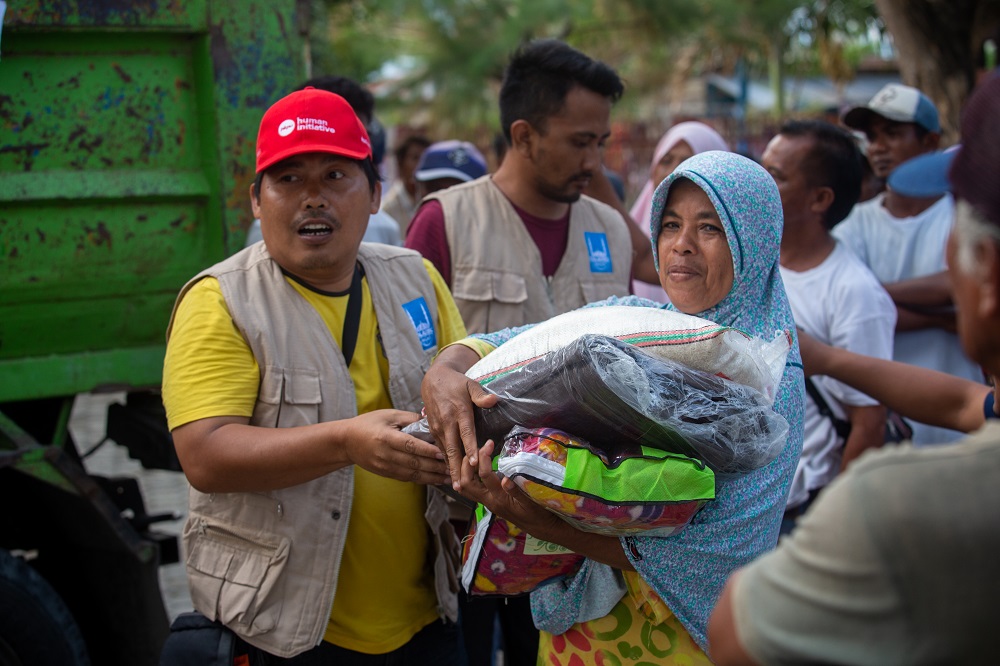 Now, in Sulawesi, our emergency teams gave out food, water, and hygiene kits as well as items like tarpaulin and blankets – reaching nearly 19,000 families. We also provided special food for malnourished children and promoted good hygiene practices to stop the spread of disease.

Helping the people of Central Sulawesi to repair shattered lives

In the months that followed the disaster, our focus turned to helping Sulawesi families to rebuild their lives and livelihoods.

Our Islamic microfinance scheme gives families cash to set up small enterprises, whilst a separate programme supports others to launch businesses cultivating mushrooms. 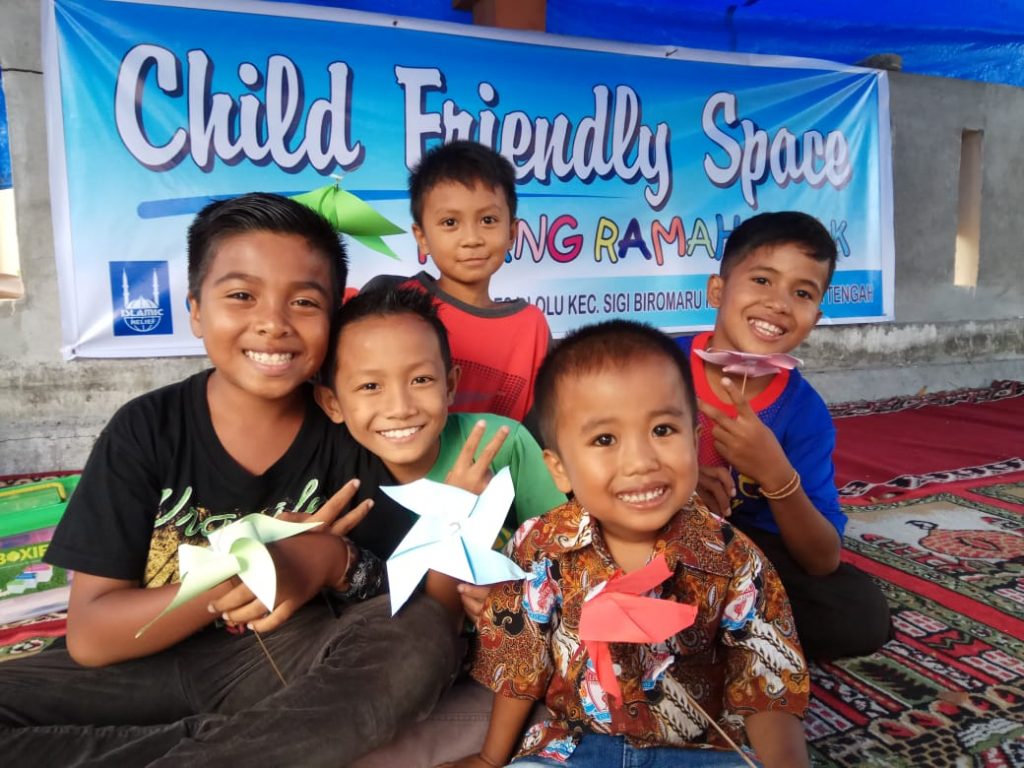 About 400 children attended our child-friendly spaces, set up in the aftermath of the disaster.

“Alhamdulillah, Allah listened to our prayers,” says Azma, who received one of over 500 temporary shelters built by Islamic Relief in Sigi to house families who had lost their homes.

The wooden homes are specially designed to be earthquake-resilient.

“Right now we are delighted and happy to be in this temporary shelter. It is simple but we are very grateful to God. I feel safe, [and it is] more comfortable than living in a tent – thank you, Islamic Relief.” 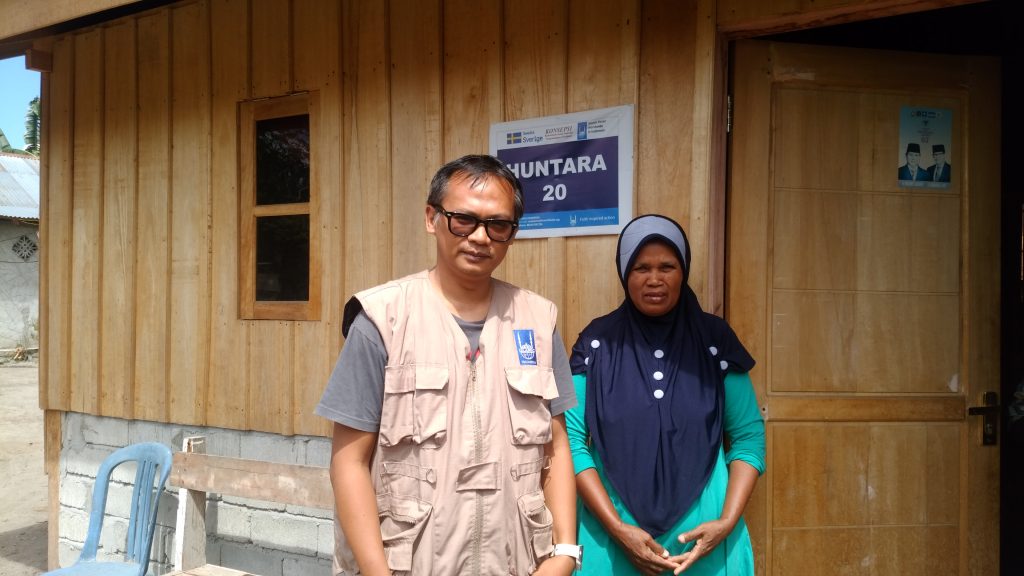 Azma with Islamic Relief’s Rully Prayoga, outside her temporary home.

One year after the disaster, normal life has resumed for most local people – but others still face uncertain futures.

“There are still many people like Azma living in temporary shelters, or even tents,” says Rully Prayoga of Islamic Relief. “They are desperate to return to their homes. Islamic Relief is doing all we can to help them and other survivors through our recovery plan which focuses on supporting communities to build brighter futures.”

As well as giving survivors the support they need to earn a living once more, Islamic Relief is rebuilding schools in Pakali which were destroyed by the tsunami.

Islamic Relief has been working in Indonesia – one of the world’s most disaster-prone countries – for nearly 20 years. Less than three months after the disaster in Central Sulawesi, our emergency teams swung into action once more as a tsunami swept across the Indonesian islands of Sumatra and Java.