2004 tsunami: 16 years on, Islamic Relief is still by the side of those affected

HomeWhere We WorkIndonesia2004 tsunami: 16 years on, Islamic Relief is still by the side of those affected

When the Indian Ocean tsunami struck in 2004, the international community leapt into action. Islamic Relief was there from day one, and has been supporting families and communities affected by the disaster for over 15 years.

On 26th December 2004, the world watched in horror as a deadly tsunami struck the Indian Ocean, killing over 230,000 people throughout Southeast Asia and causing widespread destruction.

The day after the tsunami hit, Islamic Relief were distributing food, medicine, tents and hygiene supplies. We provided ambulances, mobile health clinics and two cargo planes packed with medical and hygiene supplies – 30,000kg of medical supplies and 28,000kg of hygiene kits. In the days following the disaster, we handed out 48,000 litres of water every day.

Over the next year, our work focused on building replacement homes for survivors and providing them with livelihood, education and healthcare support. This included building eight new schools and twelve health clinics, immunising 3,500 children, and running health and hygiene sessions. We began a cash-for-work scheme, and provided long-term care for 300 orphans. We also trained more than 100 midwives, provided food packages to 17,000 families, and donated buses to help the government transport displaced people.

We helped orphanages and boarding schools to create reliable living through aquaculture, vegetable and poultry farming activities. The orphanages used the ongoing income to improve living conditions and the learning environment for children enrolled there.

During the 10th Commemoration of the Aceh Tsunami the President of Republic of Indonesia, HE Susilo Bambang Yudoyono, awarded Islamic Relief with a certificate of appreciation for our work in supporting those affected by the tsunami.

Essential support for Suleiman and his family

“Today marks almost 16 years since the passing of our father, a victim of the tsunami disaster. At the beginning just after the tsunami disaster, we lived with serious uncertainty. We had no source of income and we were living in an emergency tent. My siblings and I were very young and my mother was suffering from deep psychological trauma of having lost my father” says Suleiman, describing the struggle his family faced in the aftermath of the tsunami. 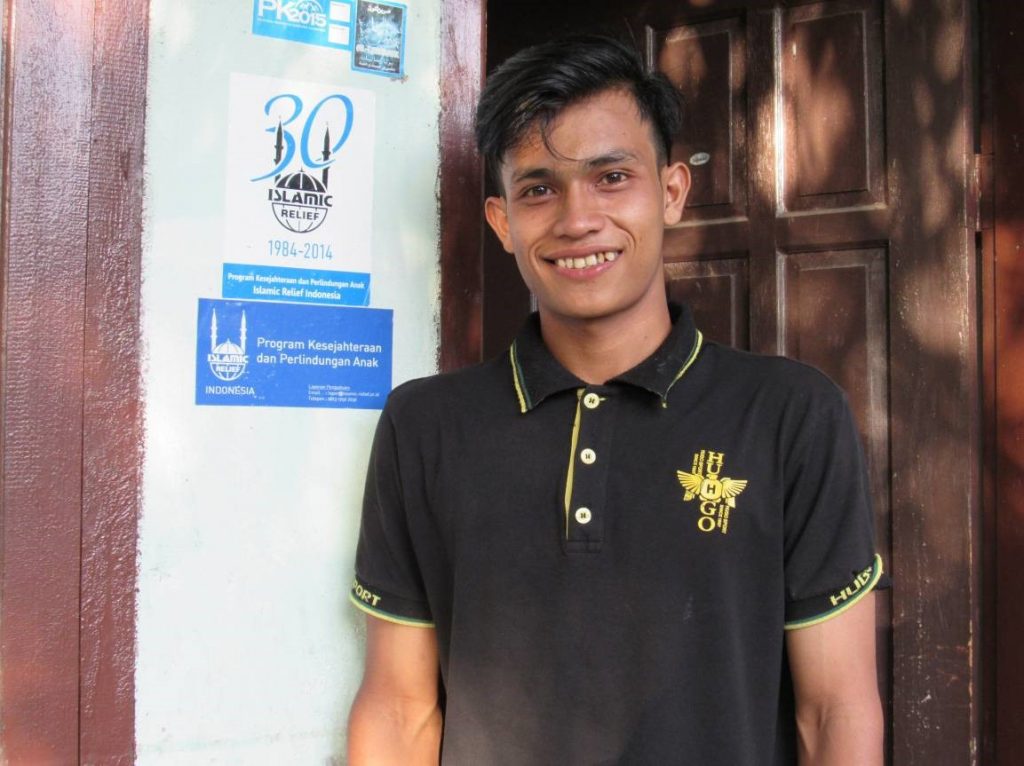 Suleiman lost his father to the tsunami but found a lifeline in Islamic Relief.

Islamic Relief intervened and sponsored Suleiman, offering financial support to his family so they could afford essential items, food and allow him to gain an education. We also offered much-needed moral support at an extremely difficult time in the family’s life.

“Islamic Relief is really helpful for me in encouraging me to keep moving on and reach a good future. I had become an orphan not by choice, but it is a fact of life. Whenever the thought of living alone and being vulnerable comes, I keep returning to the realisation that Islamic Relief will continue helping me in achieving my life goals”, says Suleiman.

“I would like to thank Islamic Relief, who have been helping orphaned children like myself. They have been very helpful and we see a lot of change in our lives, and the prospect of a brighter future. The guidance, assistance and support from Islamic Relief has been very important for us, and the attention we have received from them has been extraordinary”, he says.

Indonesia remains extremely vulnerable to natural disasters and climate change, which is now worsened by Covid-19. Since 2004, Islamic Relief has been among the first to respond to disasters in Indonesia including:

Islamic Relief also works to build resilience of communities to reduce the impact of future disasters. Two years after the Aceh tsunami, we launched a Disaster Risk Reduction Programme for residents, schools and health facilities.

We work in line with the international framework of Disaster Risk Reduction to reduce the number of people impacted and the economic loss caused by disasters. In March 2019 in Sumbawa Island, we launched a project which is supporting communities in both disaster preparedness and to build livelihoods upon which they can rely.

This is just some of the work we have carried out in the years since the 2004 tsunami. We continue to work alongside the people of Indonesia, helping them access education, healthcare, and training to support their livelihoods, as well as building resilience to any future emergencies.

Please support us in continuing to help the world’s most vulnerable members in Indonesia and beyond: Donate now