This World Environment Day, our head of global advocacy, Shahin Ashraf, argues that Just Transition may offer the answer to combating the climate crisis, while protecting the communities we serve. 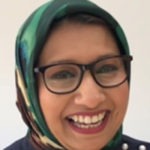 The question we all need to ask ourselves is, where and how do we hope to live in 30 years time?

The climate emergency is worsening at an alarming rate, and we are working against the clock when it comes to finding the right solution.

Just Transition is a framework developed by the International Trade Union Confederation.  It involves eradicating poverty and promoting social inclusion, while reducing emissions in line with global commitments to tackle climate breakdown.

There’s no doubt that building a zero-carbon economy will see major social and economic changes.

Just Transition seeks to ensure that workers are not left behind in the fight against climate change, and that measures taken to reduce emissions do not harm the communities we serve.

The future is at stake for this generation and generations to come, and I believe that Just Transition offers an efficient and fair solution to the climate crisis.

Past climate campaigns and solutions have done little to tackle the issue from the root. However, Just Transition offers a framework for a shift to an economy that is sustainable and fair for all its members.

We must ensure that our efforts to help combat carbon emissions put workers at the forefront and ensure that there is a just transition for communities, which will help to create a more equal society.

We must show respect to the people and communities whose hard work has underpinned much of the economic benefits which we see. Just Transition aims to reduce carbon emissions while building on the heritage, identity, and vibrancy of existing places.

Governments, such as that in the UK, have a poor track records of managing deep industrial change in a just way. As a result, we have ended up with a profound lack of trust in government promises that ‘this time will be different’.

Given the urgency of the climate emergency, only a shared national mission will do if we are to embed the Just Transition framework into our policies in a meaningful way. For this to happen, it is important to build a joined-up environmental and labour movement. This is where faith communities can come together in solidarity and work to help focus on the rights, needs, and voices of workers in policy design around measures to combat the climate crisis.

So how do we do this?

Trust, the currency of transition, is in short supply. Rebuilding it has three essential elements:

Trade union legislation must be revised so that union members are able to take legitimate industrial action if they feel that their workplace is at risk of being left behind as the country decarbonises. Workers should also be supported to reskill and take part in industry-wide transition planning.

National carbon budgets should be mapped against the needs of regions in a way that reflects the different carbon reduction trajectories of different parts of a country.  This would provide a focus for localised industrial strategies supported by the Just Transition Fund. In the UK, this will require new regional authorities and local economic partnerships (LEPs) which will have a broader mandate and more democratic membership than existing ones.

These measures are just the start, and we need to go even further to ensure that workers are not marginalised in the fight against climate change. By adopting the Just Transition framework, we will go beyond consulting communities when it comes to policy changes, and actually co-design policies with them. By doing so, we will ensure that their voices are truly heard when it comes to combating carbon emissions, and that their needs are protected.